Croatian settlers initially attended St. John the Baptist and later St. Joseph Church. However, within a short period of time the growing community of 100 Croatian settlers petitioned the bishop to found a Croatian parish reflecting their own language and heritage. Permission was granted and Rev. George Violich came to Joliet from Croatia in May 1906 to establish the parish, which today is St. Mary Nativity.

The parish school, always an integral part of life of St. Mary’s and began of the Joliet immigrant community. Through the untiring efforts of the Sisters of the Precious Blood from Alton, Illinois, who originally staffed the school, and later the School Sisters of St. Francis of Christ the King from Lemont, the school thrived.

In 1914 an addition was built to accommodate the increasing school enrollment and in 1943 two buses for school use were purchased. The fire destroyed much of the school on June 27, 1953, in the process of rebuilding and updating the structure, a gym was added. Recent additions have provided easy indoor access for students to the church for liturgy and other activities.

The student body represents a wide spectrum of backgrounds. There are children whose forebear were founding families, those of second and third generation’s graduates, along with children whose parents newly arrived to the area come searching for a stable educational environment for their children. 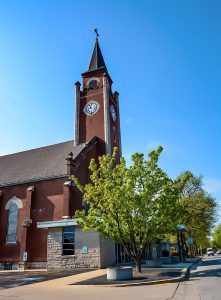 The mission of St. Mary Nativity School is to provide a safe and dynamic catholic environment where faith is nourished, knowledge grows, and mutual respect is evident. We partner with parents and the parish community to create an inclusive, diverse, and flexible atmosphere for learning that provides for global, responsible, lifelong learners.